People often criticize young citizens from underprivileged areas saying that they would rather stand in line to buy something like a pair of Air Jordans than stand in line to vote, but what if voter registration groups could use this assumption to their advantage?

Clarevonte Williams of Alpha Phi Alpha and Rashad Stanton of Omega Psi Phi have organized a program that ties voter registration booths to shoe stores in their city of Baltimore and works with these stores so that when someone wants to buy new shoes, like a pair of Jordans, they can register to vote and get a discounts.

In October, WatchTheYard.com held a workshop at Morgan State where both of the young men are students and talked to the NPHC members about creating greek events that actually create and enable social change in our communities. In this workshop, we worked on finding problems in the communities and then looked into how to address them by leveraging student’s greek networks and college following to create social action. 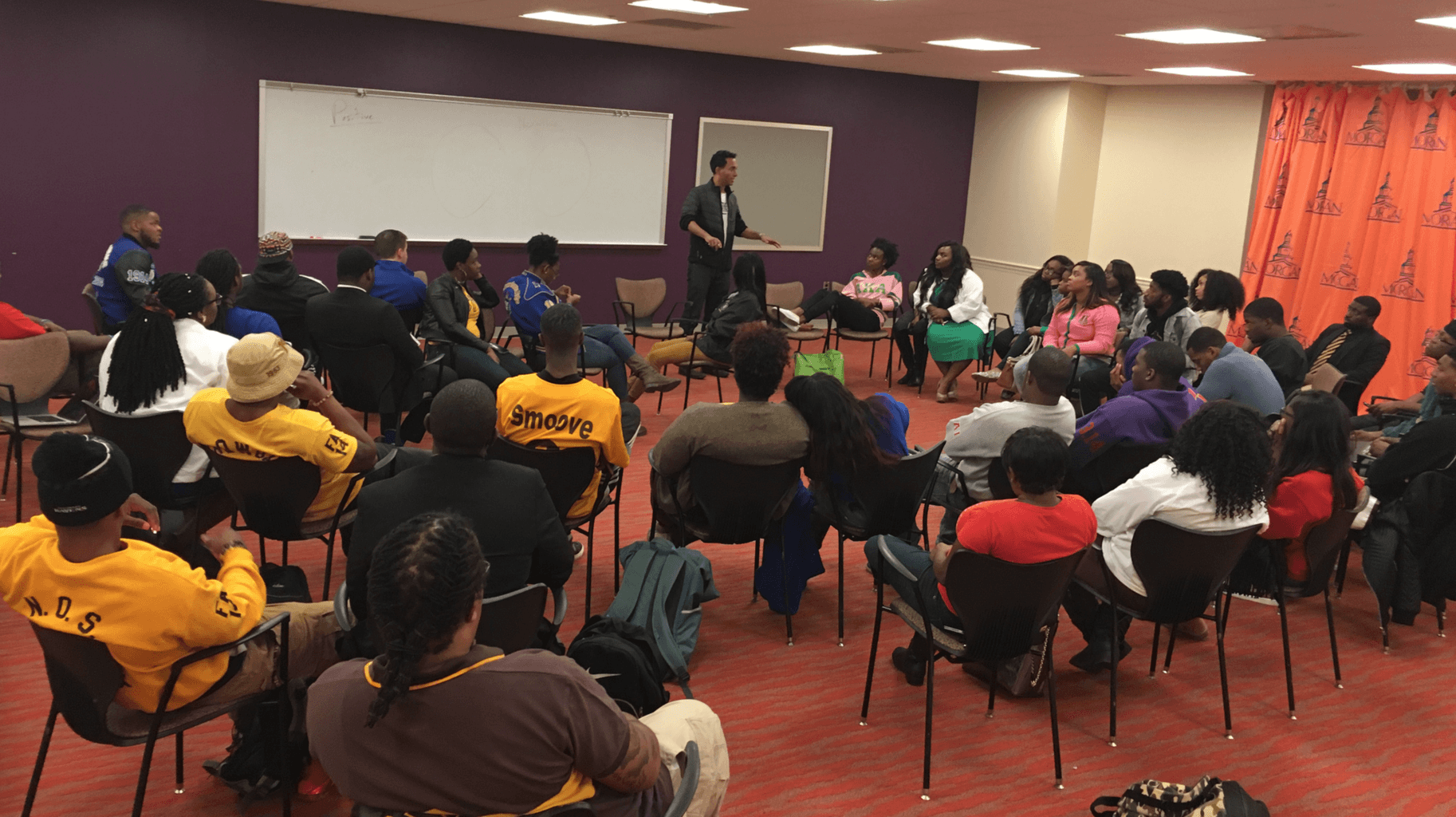 Photo from the WatchTheYard.com workshop at Morgan State

Clarevonte Williams, who came up with this idea for voter registration booths in shoe stores, was at our workshop and reached out to us after to tell us about this amazing idea that he and fellow greeks have set into action and plan on spreading around the United States.

We set up exclusive interview with Williams about his program and what he is doing. Read it below. 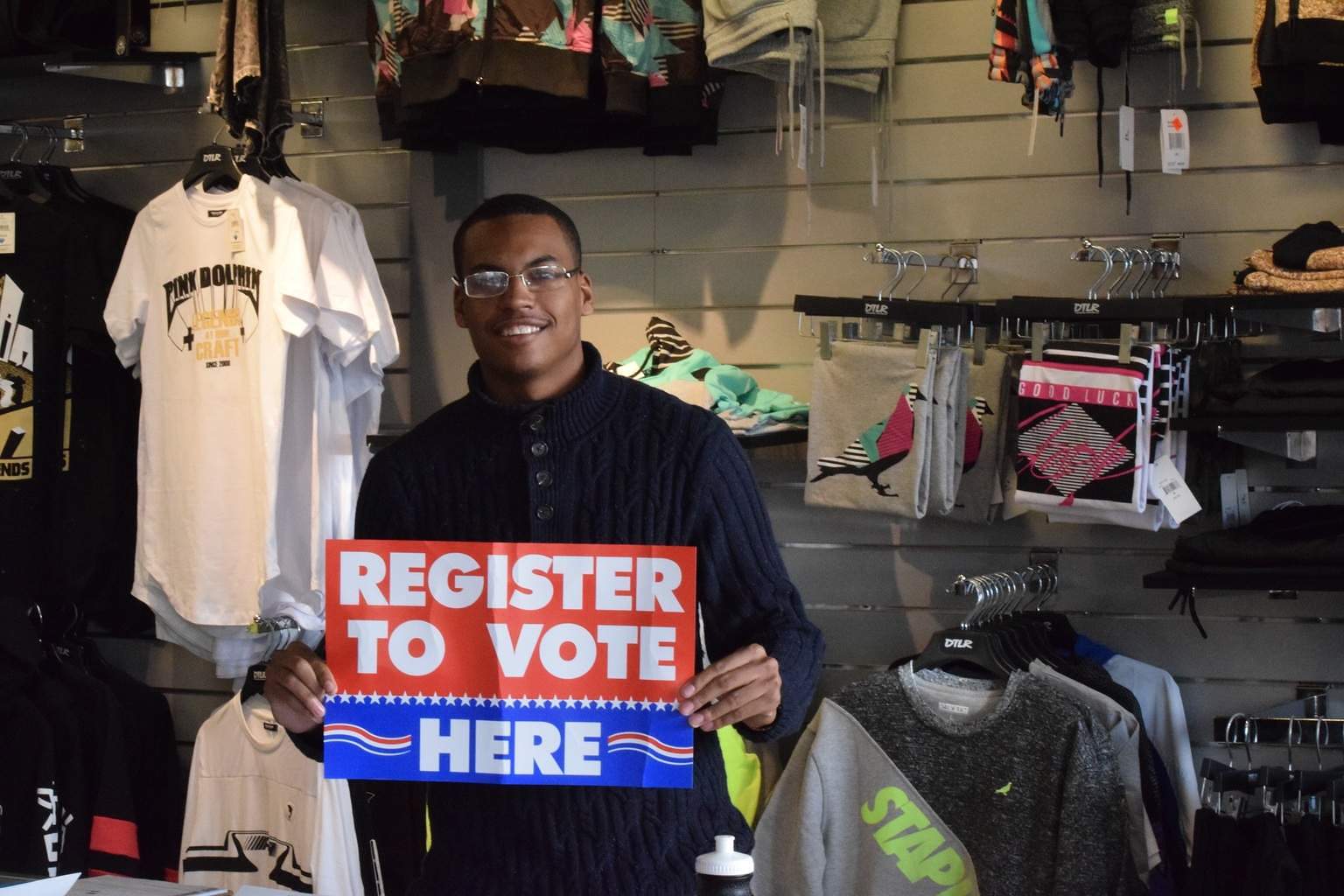 What is the goal of all this?

The goal of all this is to meet people where they are so that all citizens can get registered to vote no matter where they are. In the 2014 election, there was less than 34% of registered voters who actually voted. This is one of the worst voter turnouts in history so we have decided to make a difference in our city so that we can finally have a voice in our community.

How does this exactly work? How do you get the signatures?

There are a few steps involved to make this voter registration program a success. The first step is contacting a location, venue or establishment in which we would like to host a voter registration booth. The next step is getting the approval of the venue as well as the date. We discuss incentives for customers or visitors so that when people register to vote they can receive either a free gift or a cheaper deal on something they might like. An example of this was the last voter registration drive we collaborated with DTLR where we gave away a 15% discount on all purchases for individuals whom registered to vote as well as free hats and hand towels that were donated by dtlr.

Explain how you came up with the idea?

In my junior year at Morgan State University I served as the President of the Political Science Association and I implemented voter registration drives for my entire university and I saw a difference in my student body from not engaging in politics to discussing the upcoming election. Therefore when myself and a colleague of mine (Rashad Stanton) was appointed to the Baltimore City Youth Commission we both decided to do something different in these positions that predecessors before us haven’t been able to do successfully

Who all is involved? Who are the Greeks involved and what chapters are they in?

What stores are involved?

We have already partnered with Downtown Locker Room, Shoe City, Maxies Bar and grill and multiple locations throughout the City of Baltimore.

Tell us how the first partnership went and how you expect to grow?

The first location that we collaborated with is Downtown Locker Room and it went well we had a DJ, DTLR syndicated radio host and giveaways as well as willing participants there to register to vote. We didn’t have a huge turnout but we registered a good quantity of Baltimore city locals whom didn’t have any interest in registering to vote prior to coming into the store that day. We not only registered locals to vote but we also talked with individuals who didn’t have any interest in politics at all and we received feedback on how they view their government as well as the reasons why they don’t believe in voting. We expect to expand the awareness of voting by continuously registering individuals to vote and instilling the importance on why they should vote throughout venues across the city.

We at WatchTheYard.com would like to congratulate both Clarevonte Williams and Rashad Stanton as well as everyone else involved on their initiative. They used their creativity, resources and their connections in the community to make something great happen. We encourage other cities to try this method of voter registration.

Share this article with a friend on social media and spread the word!