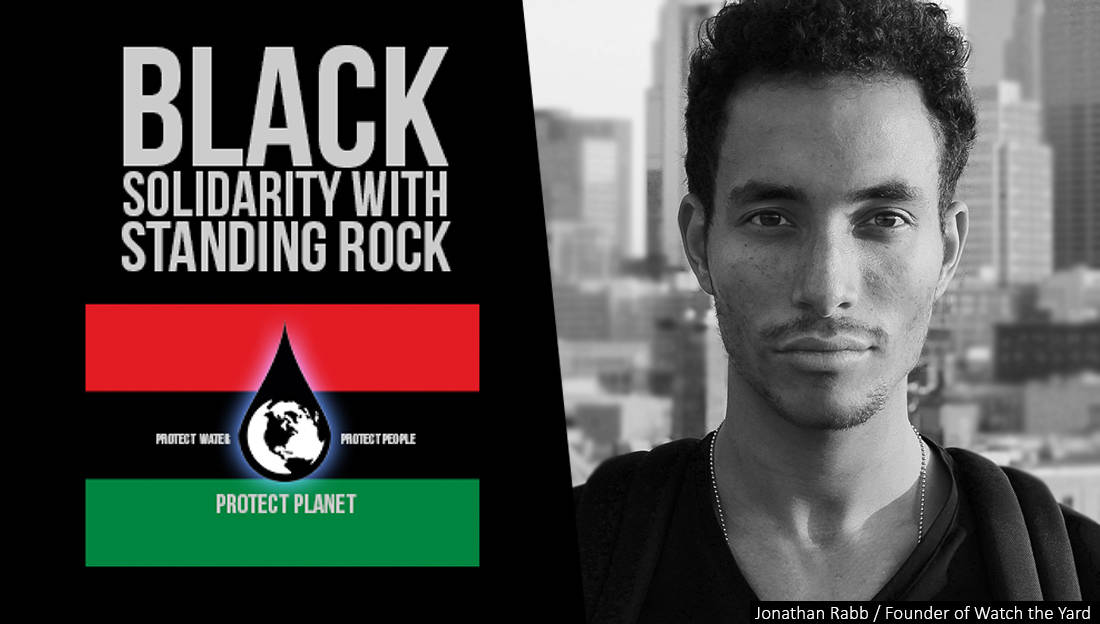 Since Sunday night, more than 167 Native Americans and allies fighting the $3.8 billion Dakota Access pipeline have been injured by police, who attacked them with rubber bullets, tear gas, mace canisters and water cannons in freezing temperatures.

People who are against the Dakota Pipeline, which is planned to carry crude oil from North Dakota to Illinois through the Standing Rock Native American Reservation, are saying that it poses a huge threat to water safety since a leak would contaminate the Missouri River, an important water source for the reservation. The pipleine is also running through sacred sites and sacred land. “The chief executive of Energy Transfer Partners, the company building the pipeline, said last week that he’s refusing to budge on the pipeline route,” Huffington Post states.

Jonathan Rabb, a member of Kappa Alpha Psi Fraternity Inc. and the founder of WatchTheYard.com, will travel to the Standing Rock Indian Reservation November 23rd and 24th to stand in solidarity with the Water Protectors. Rabb is using this trip to learn from the protectors how to best use the Watch The Yard platform to foster support for their movement from the Black community and in particular, find ways that members of Black fraternities/sororities from across the nation can help “protect the Water Protectors.”

Too often, Native American communities and the issues they face are erased from the mainstream political conversation. During Thanksgiving, Americans selectively focus on a single historical interaction between Native people and colonizers. Instead, this weekend Jonathan and the Watch The Yard team will use the site’s platform and the trip to do their part to take action against the ongoing militarized attacks on Standing Rock’s Water Protectors and their allies.

“Since April, when citizens of the Standing Rock Sioux Nation set up the Sacred Stone Camp, thousands of people have passed through and pledged support. Environmentalists and activist groups like Black Lives Matter and Code Pink have also stepped in as allies,” NPR’s Code Switch states.

“This is a struggle that no one can deny. What is happening to the Native community is wrong and it is my responsibility as someone who lives in this country to spread the word about what is going on to my particular community, the Black community,” Jonathan stated. “In a moment where minorities are increasingly threatened by state violence, it is important that Black people, as well as other minorities, are visibly there, standing at each other’s side, building coalitions and showing love.”

While major news networks are covering what is happening in North Dakota to some degree, Water Protectors have repeatedly called these organizations out for not telling the full story. “The people in Standing Rock need to be seen and heard as much as possible, Watch The Yard will do its part in making sure these people are heard by the Black community. We as Black people understand how news stories can be twisted to make demonstrators look violent when they are not, it has happened to our community multiple times this summer alone.”

From Flint, MI to Standing Rock, all our peoples want is clean water and respect. Why would you deny that?

“From Flint, MI to Standing Rock, all our peoples want is clean water and respect. Why would you deny that?” Rabb tweeted, pointing at the similarities between Standing Rock and the thousands of African-Americans who are still being poisoned by the city tap water in Flint, Michigan (the 8th largest city in the United States when it comes to percentage of African Americans).

After President Obama issued a state of emergency in response to the water crisis in Flint earlier this year, Watch The Yard created the Black Greek Water 4 Flint Fund which successfully raised money for the United Way of Genesee County to purchase water filters, bottled water, emergency support services and prevention efforts to the residents of Flint.

Jonathan sees this trip to Standing Rock as a continuation of Watch The Yard’s fight for social justice. “Our Native brothers and sisters are fighting for clean water. Not just for themselves but for us [Black people] and the entire earth. This is their sacred ground and I believe it is our duty to stand with them, support them and show them that Black people across the United States have their back,” he said. “Watch The Yard brings in up to 1 million Black college educated readers a month, we are trying to find the best ways for our readers to join together and help.”

“As a NUPE, the tenets and values of Kappa Alpha Psi Fraternity, Inc. are an integral part of my life’s work. I am driven to ACHIEVE in my endeavors by fighting to rectify issues of socioeconomic injustice, and I leverage the education and privileges that I have been afforded in society to bring voice to issues that otherwise might go unnoticed,” Jonathan said quoting his fraternity brother Demar Lewis.

“I will always stand on the side of indigenous communities who are trying to protect their freedoms and dignities and I urge other members of the Divine 9, HBCUs, Black churches and the Black collegiate solidarity movement to support these people who are risking their lives and being hosed down in freezing weather, maced and attacked by dogs and rubber bullets to protect the earth that we all live on.”

In the meantime, Watch The Yard urges that the Black community ask questions and inform themselves about what is currently happening.

Click here to check out this very informative syllabus of reading material on the history of what is happening at Standing Rock: https://nycstandswithstandingrock.wordpress.com/standingrocksyllabus/

Here is list created by The Free Thought Project on ways you can help right now:

1. Call North Dakota governor Jack Dalrymple at 701-328-2200. When leaving a message stating your thoughts about this subject please be professional.

2. Sign the petition to the White House to Stop DAPL: https://petitions.whitehouse.gov/…/stop-construction…

3. Donate to support the Standing Rock Sioux at http://standingrock.org/…/standing-rock-sioux-tribe…/

10. Call the executives of the companies that are building the pipeline:

“The most effective means of showing support for this cause is to actively participate in protecting this sacred land. Anyone who is able to travel to the peaceful encampments is encouraged to do so. For those unable to make the journey to North Dakota, please utilize the alternate methods provided to show your support for the Standing Rock Sioux who have united over 100 tribes from across the U.S. Please join this effort to stop this pipeline, which desecrates sacred lands and has serious potential to damage or destroy the Standing Rock reservations lifeblood – its water.” – Jay Syrmopoulos