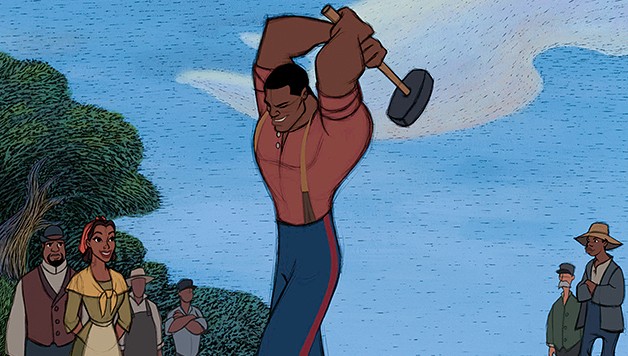 Did you know that Princess And The Frog is not the only Disney cartoon about African-Americans?

John Henry was a former slave who’s mighty strength made him one of the earliest African-American role models. Wielding a sledge hammer forged from the chains that bound him in servitude, he was a one-man railroad crew who ‘could move mountains’. He is put to the ultimate test when he faces a mechanical power hammer that threatens to take away his land.

The story of John Henry was released in 2002 as direct-to-video animated anthology film hosted by James Earl Jones on the Disney’s American Legends DVD.

The film’s new short is based on John Henry and stars Alfre Woodard and Tim Hodge. John Henry was later released on Blu-ray in Walt Disney Animation Studios Short Films Collection on August 18, 2015 and is the perfect story to explain hard work and pride in one’s work to children.

Here is the summary:

“John Henry, a freed slave, happens across a railroad building project. An entire crew of freed slaves has been promised land if they can finish by deadline, but they’re exhausted and unable to continue. John, though, has the strength of ten men, and revitalizes all of them. But despair sets in again when the railroad sends a steam hammer to replace the crew and burns the contract. John proposes a challenge: man against machine. After a heroic effort, including a tunnel through solid rock by swinging two hammers at once, John wins, but he also collapses in his wife Polly’s arms. She’s recounting this whole story to their young son, to explain why his father was so great.”

>> If you liked this video, click here to read our “Disney Princesses Reimagined As Members Of Black Sororities” article! <<

Please share this post with anyone who has children! This is a great depiction of African-American excellence!

[To watch the full movie in HD quality, the short is included in the  “Walt Disney Short Film Collection” on Netflix.]