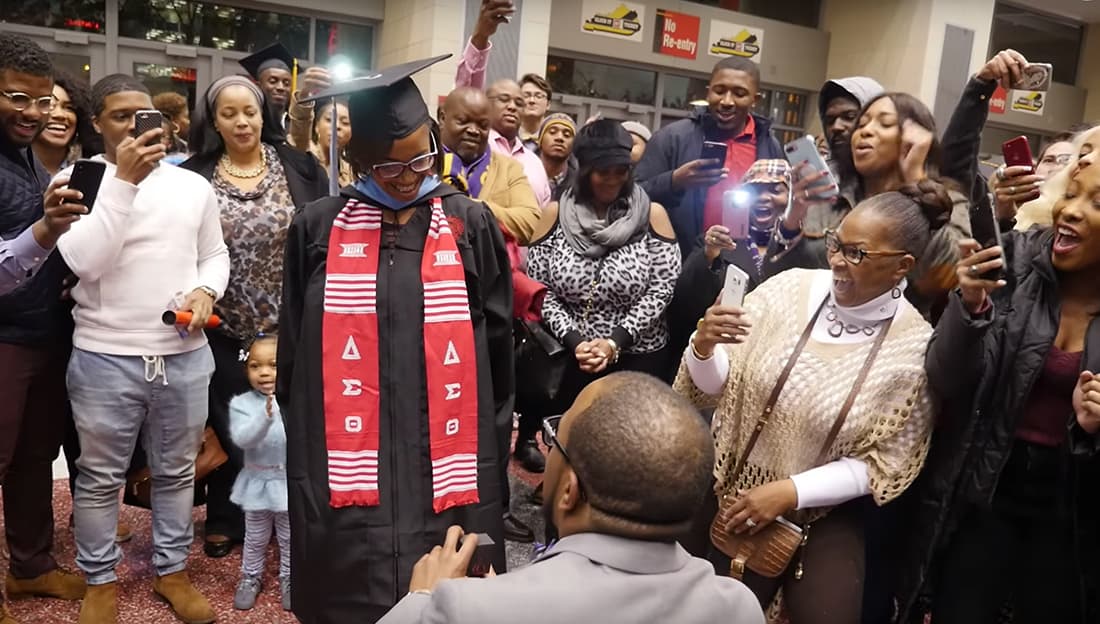 With people graduating, moving on to new stages of their lives and celebrating the holidays and new year, there are a lot of wedding proposals happening across the country. We at WatchTheYard.com just so happened to come across what has to be the most Black greek wedding proposals of 2017.

The video comes from the University of Louisville’s graudation where Kameron White, an initiate of the Mu Epsilon Chapter of Delta Sigma Theta, received her Master’s in Counseling. She stands in the middle of a circle of Deltas to be serenaded with a traditional Delta song and then proceeds to do the chant “What is a Delta?” that goes as follows:

A DELTA is
What an Ah-ka ain’t
What a Zeta wants to be
What a Sigma can’t
What an Alpha likes
And a Kappa loves
and what a QUE PSI PHI can’t get enough of..

As she gets to the “and what a QUE PSI PHI can’t get enough of..” part of the chant, her long-time boyfriend, Ja’Mahl McDaniel, an initiate of the Rho Lambda Chapter of Omega Psi Phi pops out gets on his knee and starts singing the traditional Omega Psi Phi song “All of my love” to her. He takes out a ring and…well… we will let you watch the rest.

There is sisterhood, brotherhood, a graduation, family, three chants/songs, and a lot of Coleman Love all in less than 2 minutes.

It cannot get more Black Greekdom than this!

Watch the full video for yourself below!