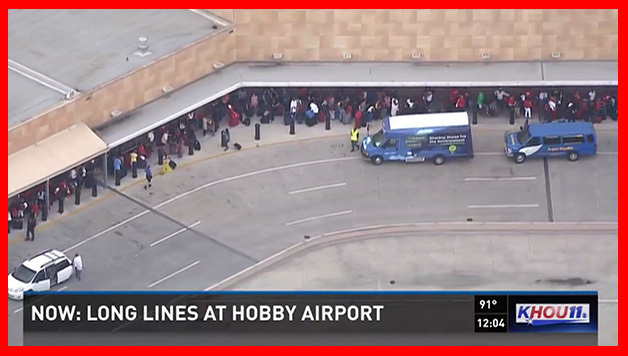 In an unexpected turn of events, the members of Delta Sigma Theta Sorority, Inc. who attended the sorority’s 52nd annual national convention in Houston caused a traffic jam at the city’s Hobby Airport on Thursday that was so big that it made local news.

According to KHOU 11 News, who broke the story, “Travelers departing Hobby Airport on Thursday were surprised to find lines out the door at the passenger drop-off.”

It turns out that this TSA nightmare was caused by the convention material that 13,000 members of Delta Sigma Theta who attended the convention were given.

“A spokesman for the airport says the sorority members were apparently given thick booklets at the convention that could be mistaken for explosives when packed into checked bags. The booklets forced TSA officials to hand check most of the luggage.” KHOU 11 stated.

This backup was so big that it made the local news station’s traffic report and they even flew a news helicopter out to get aerial shots of the long line. The areal footage shows the line at the drop off point and the congestion that was almost exclusively women wearing crimson and cream.

This year’s convention was a huge success for Delta Sigma Theta who was able to bring in sorority sister and U.S. Attorney General Loretta Lynch as a keynote speaker at the convention’s Monday luncheon.

Watch the video below to see KHOU 11’s coverage of airport congestion.