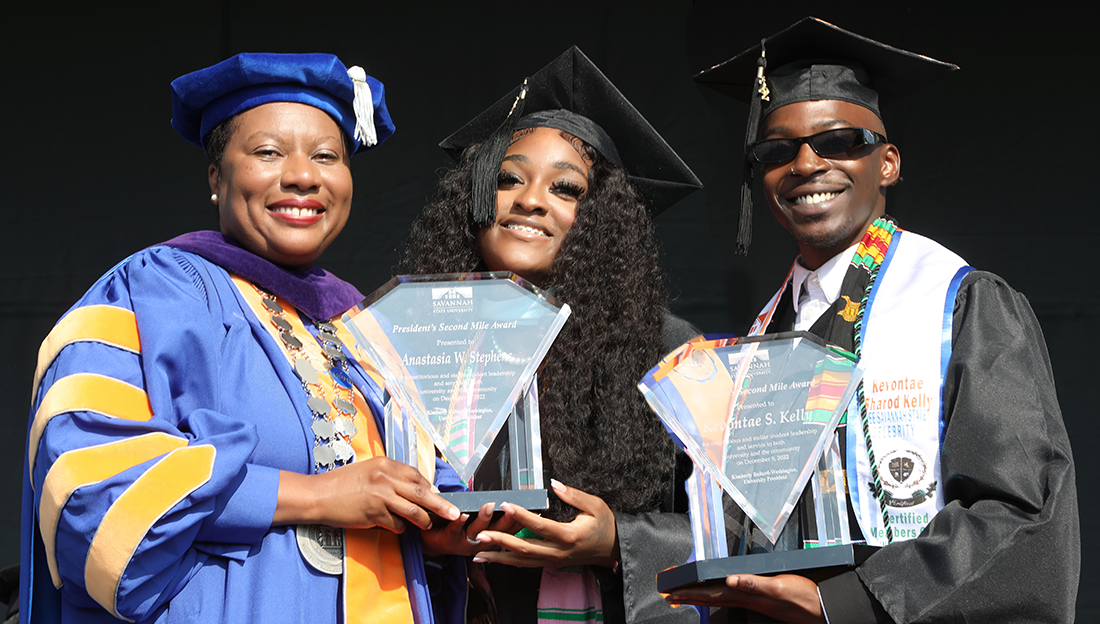 Presented during each commencement ceremony to a deserving senior or seniors in recognition of stellar and meritorious achievement, the President’s Second Mile Award is the highest honor awarded to a student and is based upon character, values, leadership, and service to the university and the larger community.

A native of Colquitt, Ga., Kelly is a Computer Information Systems, Logistics and Supply Chain major best known as the voice of the Powerhouse of the South, Savannah State University’s marching band. Described as a natural born leader who truly cares about integrity, dignity and honesty, Kelly volunteered with several local organizations and campus clubs during his collegiate career, including Overcoming by Faith Ministries where he served as a greeter and assisted with church outreach programs, and the Frank Callen Boys & Girls Club where he mentored young children, encouraging them to reach their full potential. On campus, he served on the Campus Activities Board and as event coordinator for the Student Government Association.

Stephens, a mathematics education major from Bowman, S.C., earned a 3.6 grade point average, serving as Vice President of the Student Government Association. During her collegiate career, she was a volunteer tutor with Bethune Bowman Middle and High School Band and a student coach with Oglethorpe Charter School. On campus, she served as a Student Orientation Leader and volunteered her time helping others in the College of Education’s Science, Technology, Engineering and Math (STEM) lab. A member of Alpha Kappa Alpha Sorority, Incorporated, Stephens completed internships with Sol C. Johnson High School, where she helped facilitate and manage class instruction; and as a Robert Noyce summer intern where she strengthened her skills as an education professional. Stephens is also a member of the Society of Leadership & Success, Freshman Academy and the Wesleyan Gospel Choir, and was selected as a 2022 participant in the Top Teach Germany Study Abroad Program.

Described by her nominators as a true servant leader who strongly believes that education is the most important thing in the world, she is known for her commitment to engaged learning with a passion for meeting needs. Stephens began her career this week as a teacher at Ridge Road Middle School in Charlotte, N.C. and plans to continue to educate with the goal of ultimately becoming a math curriculum creator.