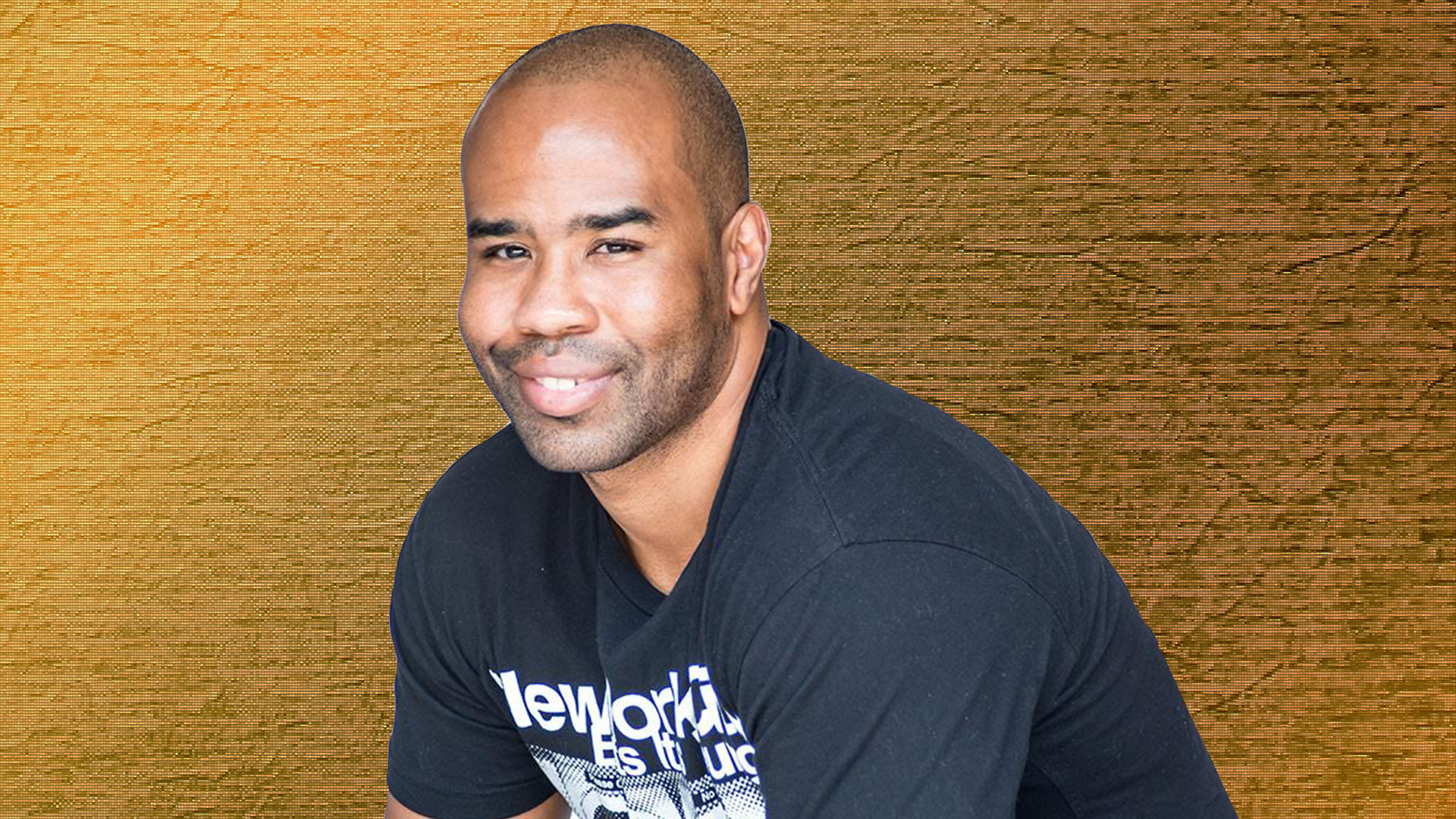 Network is everything and as members of Black fraternities and sororities it is something that we all understand the importance of. Unfortunately when it comes to entrepreneurship, Black founders often face hurdles when it comes to finding access to funding and resources.

Joey Womack, a Spring 2000 initiate of FAMU’s Beta Nu Alpha Chapter of Alpha Phi Alpha Fraternity, Inc. is working to bridge this gap and get founders of color the access to resources that they need through Goodie Nation, a company that he created in 2014 as part of his mission to help 1 billion people by 2023.

Goodie Nation recently partnered with Google For Startups to distribute $5 million in non-dilutive financial capital to 75+ of the most promising Black-led startups from across the U.S. through the Google for Startups Black Founders Fund of which Watch The Yard and multiple other startups run by Black fraternity and sorority members were recipients.

We at Watch The Yard recently connected with the Womack to talk about Goodie Nation, Black entrepreneurship, and how joining a Black fraternity as an undergrad at FAMU helped mold him into the entrepreneur he is today.

Check out the full interview below:

How would you explain Goodie Nation to someone who has never heard of it before?

We use the power of community to help really awesome diverse founders become even better CEOs; build relationships with influential people, those who work at top large corporations, and funders; and deal with the ups and downs of entrepreneurial life.

You have a goal to help 1 billion people by 2039, how did you come up with this idea and what is your strategy to reach this goal?

During Martin Luther King, Jr. Weekend 2015, I was part of a program for 30 aspiring social entrepreneurs. We were taught radical empathy and how to think big to solve some of the world’s biggest problems. On the first day, the leader of the program challenged us to help 1 billion people. So I spent the next 72 hours developing a plan to help 100 companies impact 10 million people each over the next 25 years.

It wasn’t until the end of the program that I realized the leader actually meant how could the 30 of us collectively help 1 billion people. But by then it was too late. I had my plan, and I’m dead serious about implementing it.

What made you decide to attend FAMU for undergrad?

I’m originally from Mobile, Alabama and grew up in HBCU culture. My mother graduated from Tuskegee (Delta), and my father graduated from St. Paul’s College (Alpha). One of my mother’s sisters went to and worked at Alabama St. while the other sister went to and worked at Tuskegee (along with her husband). I spent a ton of time at HBCU homecomings and the classics. And my family did a good job of setting the expectation of going to college, but never pushing to attend a specific school.

By early October of senior year in high school, I knew that I wanted to major in accounting but didn’t have specific school in mind. Actually, I hadn’t even applied to a school. Then I got a letter in the mail from FAMU inviting me to an informational session on the last Sunday of October. But that weekend was also Tuskegee’s Homecoming, and I wasn’t going to miss it.

My mom and I go to TU’s Homecoming, and have a great time. On the drive back to Mobile she asked me if I still wanted to attend FAMU’s informational and, though I was tired, “something” told me to attend.

The session was led by the legendary Frederick Humphries who does a phenomenal job of selling how great FAMU is. If you’ve ever heard him speak, then you know what I’m talking about. In the middle of the event, he calls me and seven other students to the front. He then turns around and tells us that we have full scholarships. We’re all completely floored, and then Dr. Humphries asks us to go outside while he talked to our parents.

While we’re outside, one of my friends told me that FAMU was dope, and had a ton of great parties. Honestly, I didn’t know too much about FAMU – I even thought it was near the beach. But after hearing about the business school, the full scholarship, and the great parties, I committed to attend on the spot – sight unseen.

What drew you to wanting to join Alpha Phi Alpha as an undergrad?

I could easily say it was family. My father is an Alpha. My step-brother is an Alpha. And a few others are as well, including a charter member of Tuskegee’s chapter (Roscoe Williams). But the two main reasons were the “spirit” of the fraternity, and how members always cared about my well-being while I was growing up.

As an only child, I spent a ton of time reading – including biographies of civil rights leaders. I noticed a trend where most of them were part of the Divine Nine, and the ones I most admired were Alphas. On top of that, my mother grew up in the same neighborhood MLK lived in while he was in Montgomery, and her mother attended Dexter Avenue Baptist Church. My Uncle Roscoe and his wife, Mary Lucy Williams, were good friends with MLK and Coretta so I got a bunch of personal stories growing up. I was drawn to Alpha like Luke Skywalker was drawn to the Force.

Along those same lines, I got introduced to a lot of my parent’s friends growing up. Everyone would ask me how I was doing. But I noticed that the Alphas always took it a step further, and would ask how I was doing in school. And if my grades weren’t to their expectations, then they hold me accountable by asking “why?” Even as a kid, I really appreciated the accountability.

As you’ve matured in your career and become successful, looking back, how do you think joining a Black fraternity has contributed to where you are now?

There are a ton of ways to answer this question, but I’ll go with these two: culture and mental toughness.

As a Beta Nu Alpha, we live by the chapter motto “tenacity, above all, tenacity,” and the words of Reverend Moses General Miles “if you can’t be first, then be ahead of whomever is second.” And the process of joining and thriving while being in the Chapter was a great exercise in mental toughness.

These things have served me well on my entrepreneurial journey.

This year you did a huge partnership with Google for Startups to help Black entrepreneurs financially. How do you see that partnership impacting the world?

I believe this partnership will change the trajectory of black tech entrepreneurship in this country, and the impact will be felt for decades. First, the money is helping these companies build better products, hire talented employees, and operate more efficiently. The recognition is also a bunch of doors for them. This means more revenue and more investments for exponential growth.  Second, these founders will go on to start more companies in the future by leveraging the success of their first companies. And this is where they’ll make a ton of money. Third, these founders will turn into the next generation of black investors, entrepreneur support program operators, and mentors. Finally, their black early employees will go on to become awesome entrepreneurs.

And a few of the award winners are members of Black fraternities and sororities and/or HBCU alumni. I predict this will open the floodgates of support from these organizations and schools for future members/alumni who are tech entrepreneurs.

As someone who works helping startups to grow, what are some skills you think recent grads should pick up in order to make themselves more successful as entrepreneurs?

Get good at going from idea to pilot or 0 to 1 as some would say. Practice it over and over – no matter how small the idea is. But the main thing is to get good at setting clear goals and milestones to launch and grow your company. Then get even better at hitting those milestones. Said another way – just make stuff happen. Remember, revenue over everything.

As a successful entrepreneur and someone who helps startups everyday, what do you want to see more of when it comes to undergraduate HBCU curriculum focused on entrepreneurship?

I really want to see HBCUs teach students how to use No Code tools to build and launch their tech companies. Using No Code tools like Airtable and Zapier, what used to take software developers 6-12 months now takes non-developers weeks to build at a fraction of the cost. This is how black entrepreneurs win.

Also, I’d like to see a course on venture capital investment included in the finance tracks of these schools. Also, I would like HBCUs to partner with non-profit entrepreneurship support organizations to compliment their curriculum.

How has mentorship had an impact on your career over time? Who are some mentors who have helped you get where you are at today and what did they teach you that stood out?

There are way too many to name. I’ve been blessed to have been given advice from a ton of awesome people. Some are official mentors, and some aren’t but these people have been major inflection points for me in my entrepreneurial journey: a Tuskegee engineering professor while I was a rising senior in high school, DJ D-Nice, Spencer Ingram, and Sanjay Parekh.

In most of these cases, they simply offered me a choice or told their own stories. Those choices and stories changed my life.

You are known throughout the southeast for your network and ability to connect people. What is one tip you have for someone who wants to get better at networking while dealing with the constraints of quarantine and the current pandemic?

The pandemic has made the world as small as a neighborhood. Geography is not a barrier. Use the end of 2020 and top of 2021 to check on people you might have physically run into during normal times. It is a built-in excuse to reach out to people or get a meeting with them. First, check in with them as a human. The pandemic has leveled the playing field for us as people. Then, try to provide value to them. Finally, have a clear ask if they offer to help you.

What can Black fraternity and sorority members who are established in tech related careers do to help the next generation?

Great question. There are things they can do. For black tech entrepreneurs, they should be trying to get their company as a customer. But it might be easier to start by inviting the entrepreneurs to speak (for a fee) as well as introduce them to any relevant employee affinity groups. The goal should be to find a champion/executive sponsor for the black-led tech startup. They should actively look into becoming a “Family & Friends” investor or angel investor to a black-led tech startup.

On a different note, they should be investing in the future by trying to get their companies to sponsor local K-12 tech training nonprofits who focus on black students.

Everyone has a role to play. We should be efficient in giving back.

What is next for Goodie Nation?

In 2021, we’re focused on finding 350 of the top black tech founders and tech training operators in the country, and closing the relationship gap for them. We’re doubling down on our efforts to connect them with fraternities and sororities, professional organizations like the National Black MBA Association, and top companies. This is the time for our community to take a huge step forward, and we’re excited to play a role in that.

If you want to follow Joey’s work we highly suggest you check out Goodie Nation’s Instagram @GoodieNation.