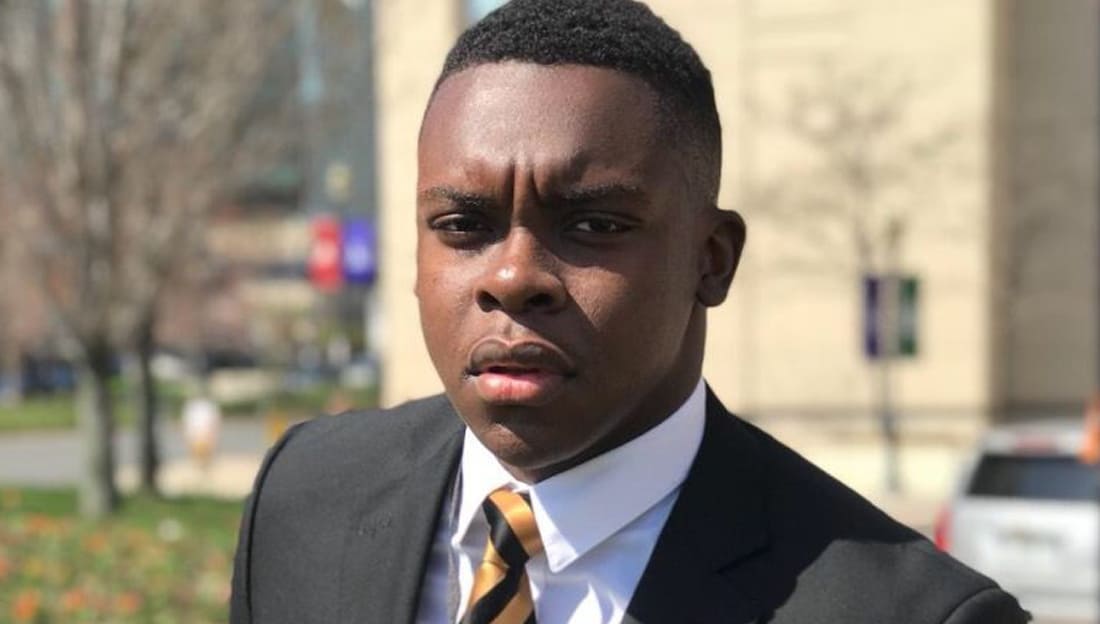 In an effort to highlight the young leaders who are leading undergraduate chapters across the nation, we at Watch The Yard reached out to the brothers of Alpha Phi Alpha Fraternity Inc.’s Zeta Eta Chapter at the New York Institute of Technology and did an interview with Akein Brown the president of the chapter.

The position of president of an undergraduate chapter of a Black fraternity is a highly respected role and there is a special pride that one takes. 21-year-old Akein Brown has used the position to gain new leadership experience, improve the lives of other students on campus and help the community around him.

We interviewed the Electrical & Computer Engineering major and talked about his position, goals, future and what it means to hold a leadership position on campus in the digital age.

What does it mean to be a chapter president to you?
The title of Chapter President comes with a lot of responsibilities and obligations but it is truly an honor. In the past, many brothers from Zeta Eta have accomplished a lot with the title and there is a great desire to accomplish the same or even more. The thought of being the point person of communication on and off campus can be overwhelming at times but it is expected with the position.

The same effort being executed with the title will be same even after I pass the torch to another chapter brother. One important piece that comes with the title is good representation. 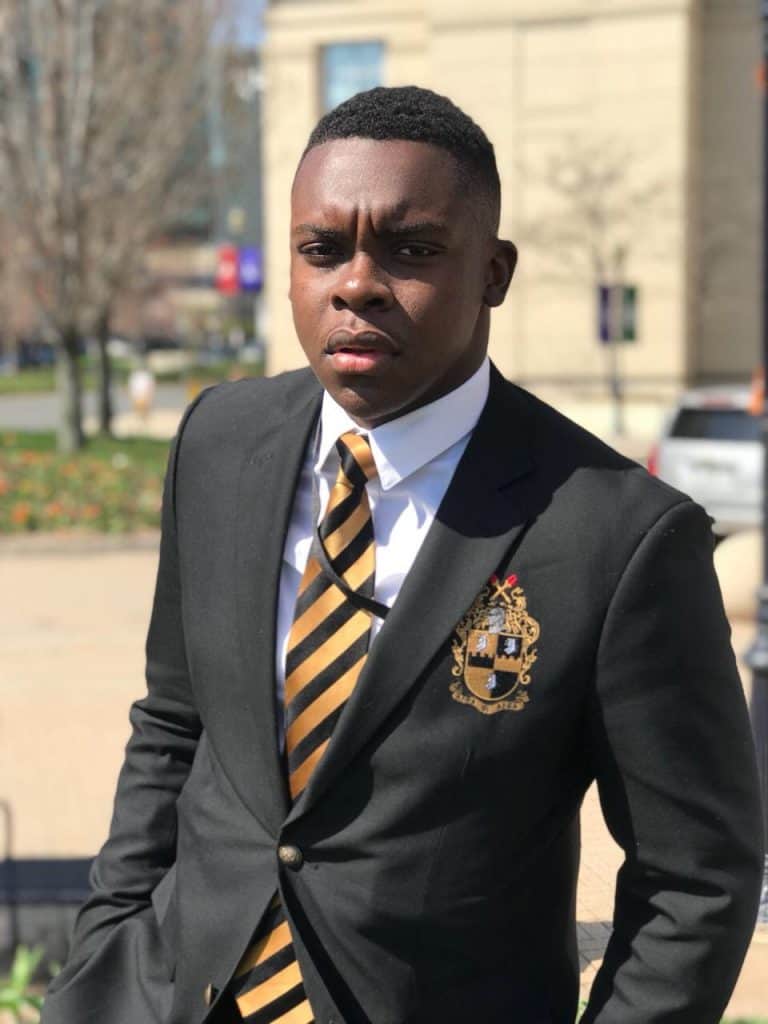 What made you decide to attend the New York Institute of Technology for undergrad?
The main reasons I chose to attend the New York Institute of Technology was because of the unique opportunity to double major in Electrical/Computer Engineering and to stay close to family in New York City. The specific double major isn’t readily offered at most institutions and can be very valuable in the future if put to good use. Staying close to family was also very important to me as well because I still have responsibilities in my household with my parents and younger sister. My parents and I are immigrants from the Island of Jamaica and had no previous college experience. Going into college, my family was my immediate and only support system before joining Alpha Phi Alpha Fraternity Inc.

What specific initiatives is your chapter heading up this year and how do you think they will improve the campus/surrounding community?
Specific initiatives the Zeta Eta Chapter is heading up this year are more Professional Development workshops on and off campus to help students and non-students who are either from other states, countries, or just young and need help with having a resume, knowing how to dress, and have proper networking skills. This is very common in New York City and is a huge problem, especially in the Black community.

We are also pushing to have more workshops on consent in conjunction with Project Alpha as there have been many cases of sexual harassment involving the #metoo Movement. Safe Sex practices must always include consent.

There is also a fitness initiative we would like to implement as many members of the chapter are fitness enthusiasts who are always exercising or maintaining a healthy diet. Many school campuses don’t have access to a gym even though students spend long amounts of time on campus. Most people become less active in college and would benefit off of programming that shows simple workout routines that can be done or effective ways of eating correctly.

Our chapter is also shedding light on Mental Health as it is something that goes ignored overall, especially in the Black community. Several of our Chapter Brothers are Certified in Mental Health First Aid. Our goal is mainly to inform our community about the importance of mental health in the hopes of more suicide prevention and more support systems for those who need it. These are some of our specific initiatives that are already in progress but are being expanded upon. 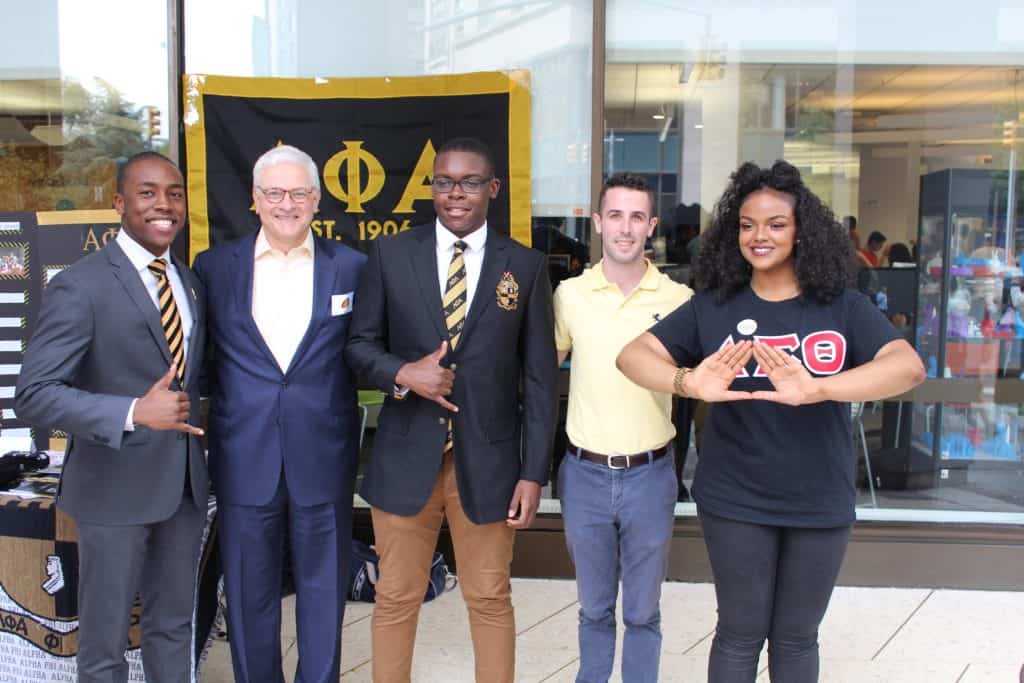 What made you want to pledge Alpha Phi Alpha?
What made me want to be initiated into Alpha Phi Alpha Fraternity Inc. was the history of the Fraternity’s inception. As a Black man enrolled at a Predominantly White Private Institution, I often found myself in classes where I was the only male student of color. This resulted in somewhat of a disconnect as I went to a predominantly African-American school named after a famous Black Engineer; Benjamin Banneker. Many of my fellow students of color struggled with staying in school and one by one started dropping out. This deeply bothered me and I did not know what to do to help. Currently, I do my best to guide and mentor male students of color on campus.

This relates to the history of Alpha Phi Alpha Fraternity Inc. due to the fact that it was founded at Cornell University which is a Predominantly White Private Institution where students of color were dropping out at an alarming rate. Cornell was one of the only schools in the country that even accepted students of color during that time period. To help aid with the issue, black students started meeting in groups to study and help each other excel in classes. A support system was created to ease a problem that ultimately led to the creation of the Fraternity.

Aside from that connection alone, Alpha Phi Alpha Fraternity Inc. also has many members that I grew up learning about in school for doing great things in the Black community and American history. This includes Norman Manley, Thurgood Marshall, and Reverend Dr. Martin Luther King.

I knew that I wanted to be a member of a Divine Nine Fraternity that all offered a support system, brotherhood, and a professional network but Alpha Phi Alpha Fraternity Inc. was the best choice for me personally.

Our chapter covers schools in some of the most busiest and most popular areas of New York City including Times Square and Columbus Circle. A lot of people pass through these areas including celebrities and brothers from all over the country so that is unique in itself.

There is also the fact that we have chapter brothers and alumni that are from states such as California and Texas. There are even brothers from other countries including Jamaica, Haiti, Cuba, & West-Africa.

Our chapter has also been known to win several step/stroll competitions in the past that were deeply highlighted. 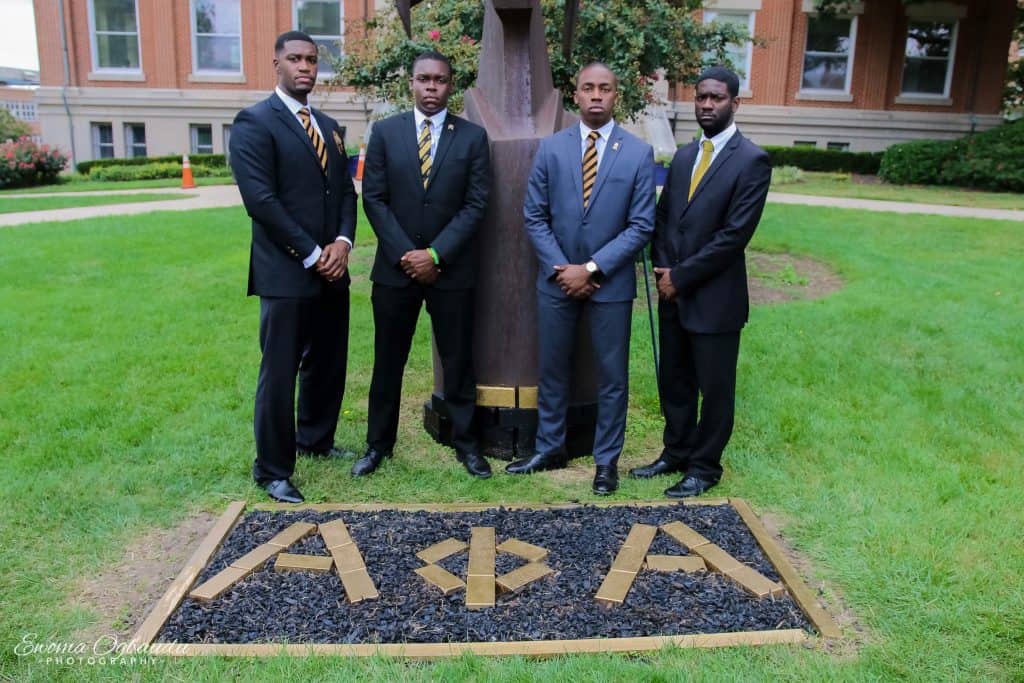 We now live in a digital world, what do you think undergraduate chapters across all orgs need to do to represent themselves online in 2019?
All undergraduate chapters across all organizations need to constantly update social media platforms to highlight some of the accomplishments being made if not all. Chapters should also make better use of digital professional platforms to display the achievements of chapter alumni to the audiences.

What does leadership mean to you?
In my opinion, leadership is all about versatility, adaptability, and a large part is knowing when to delegate. A leader knows how to accept responsibility and accomplish goals no matter what obstacles are placed in their way.

One of the most important things about being a leader is knowing when to ask for help. No one is perfect and knows how to accomplish every task or goal on their own. You must have good judgment and know how or when to use different skills or resources outside of your own.

A leader is also very personable and understanding of people and different situations. Great leaders cannot be close minded to change or different perspectives on things.

Most of my leadership experience was gained in college through my experience with being a member of Alpha Phi Alpha Fraternity Inc., Treasurer/Marketing Chair of NYIT’s National Society of Black Engineers, and the President and Founder of the Black Student Union on my school’s Manhattan campus. 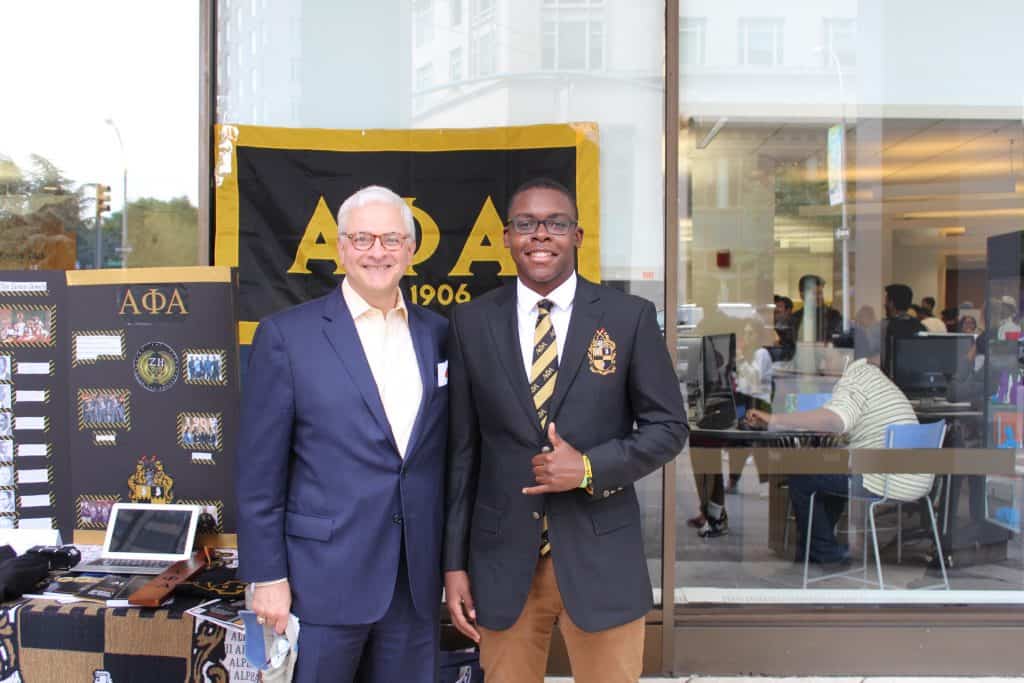 It is also a great help that a vast deal of the audience watching these videos, viewing these pictures, or reading these articles aren’t apart of any Divine Nine organizations and it just may inspire them.

There have been various moments where I needed help and like a good neighbor Alpha was there. Brothers from my chapter and outside my chapter have looked out for me in some way shape or form without me having to ask countless times. The only response to those actions are to pay it forward to others and return the favor. 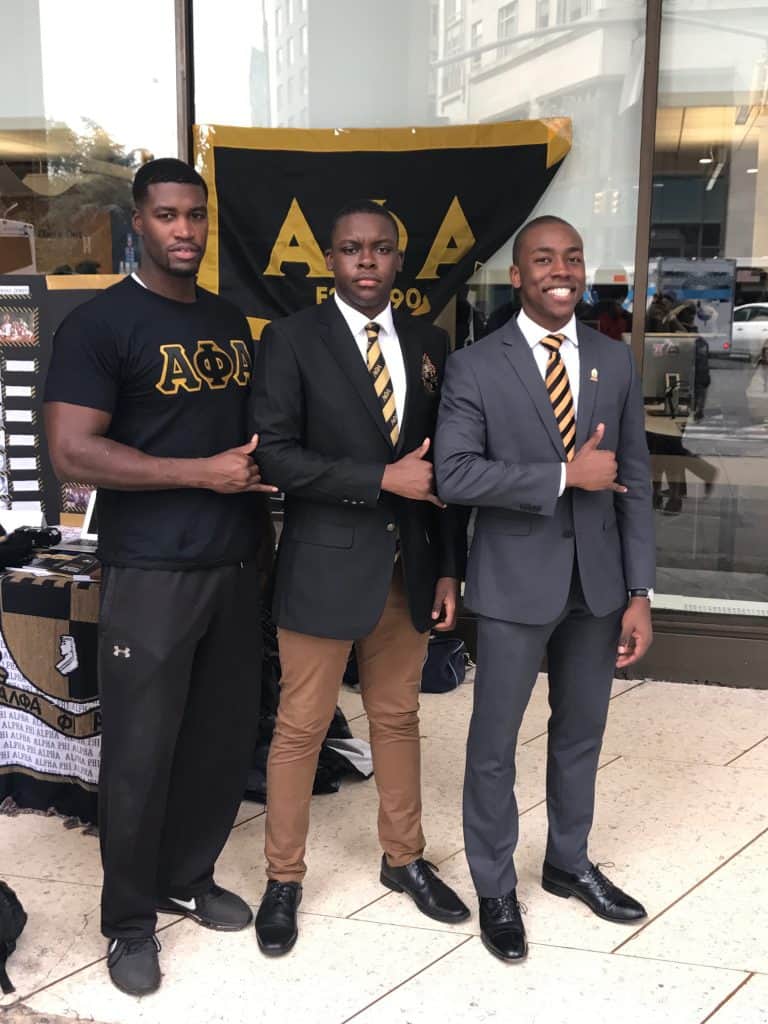 What do you plan on doing after graduation?
After graduation, I plan on hopefully working in the technology field or in the power industry. Going into school, I had no intentions of doing any form of software or programming languages but now that I was exposed to it, I see the importance and the capabilities. I was originally focused on energy and power in regards to construction but I did not stay close minded to the opportunities I now know are available.

We at Watch The Yard would like to commend Akein Brown for his work as the president of Zeta Eta Chapter which has a long legacy that spans back to 1968.