WHY DOES THIS HAPPEN EVERY YEAR!?

On Tuesday night  Sigma Phi Epsilon fraternity and Alpha Phi sorority threw a “Kanye Western” themed party on the campus of UCLA. It just so happened that a Black student by the name of Alicia Frison heard about the party when someone told her that they had seen other female students on campus walking around with stuffing in their butts. She followed the clues and ended up at the Sigma Phi Epsilon frat house, “where her fellow classmate saw a white girl wearing a chunky gold chain with her face covered in what appeared to be soot,” Revolution News reports.

To get photographic proof of what was happening Alicia and her friend told one of the girls in blackface that they liked their costume and wanted to take a picture of it. The girls posed for the picture and as they snapped the photo members of the fraternity saw what was going on and started screaming, “Oh fuck. Twenty-twenty! Twenty-twenty!”

The frat boys then told the students that they could not take pictures on private property and that they had to go. But while all of this was happening, in something that could seem as if it was litterally copied from the ending scene of the movie “Dear White People”, over forty black students found out about the party and headed straight to it.

Thirty minutes after the picture was posted to social media, white students wearing blackface started to leave the party,Revolution News reports. But the black students did not leave. Frison stated that they knew that their presence as a large group of black people could be reacted to harmfully so they went across the street and stood in protest. Even thought the party kept going, “We never approached the actual house,” Frison stated.

Police showed up to the scene and were very sympathetic to the protestors and said that it was ok for them to protest. As the party stated to thin out the protestors started to leave but as soon as their numbers got low, white students started showing up at the party again wearing the same fake grills, sagging pants, and stuffed butts. The ones who were wearing painted faces did not return.

The party kept going and one partygoer threw a bottle at the house across the street. Revolution News reports that the following then happened:

“Soon after, Frison found herself face to face with Max who claimed to be the VP of New Membership at Sigma Phi Epsilon. Max told Frison that he was “very sorry” and Frison told him,

‘Then draft a letter.’

At which, Max laughed. Max went on to tell Frison that the frat was “completely in the wrong” and said,

‘I understand, even though I don’t understand because I’m just a stupid fucking white boy.’

You didn’t really think about human beings when you created the party.” 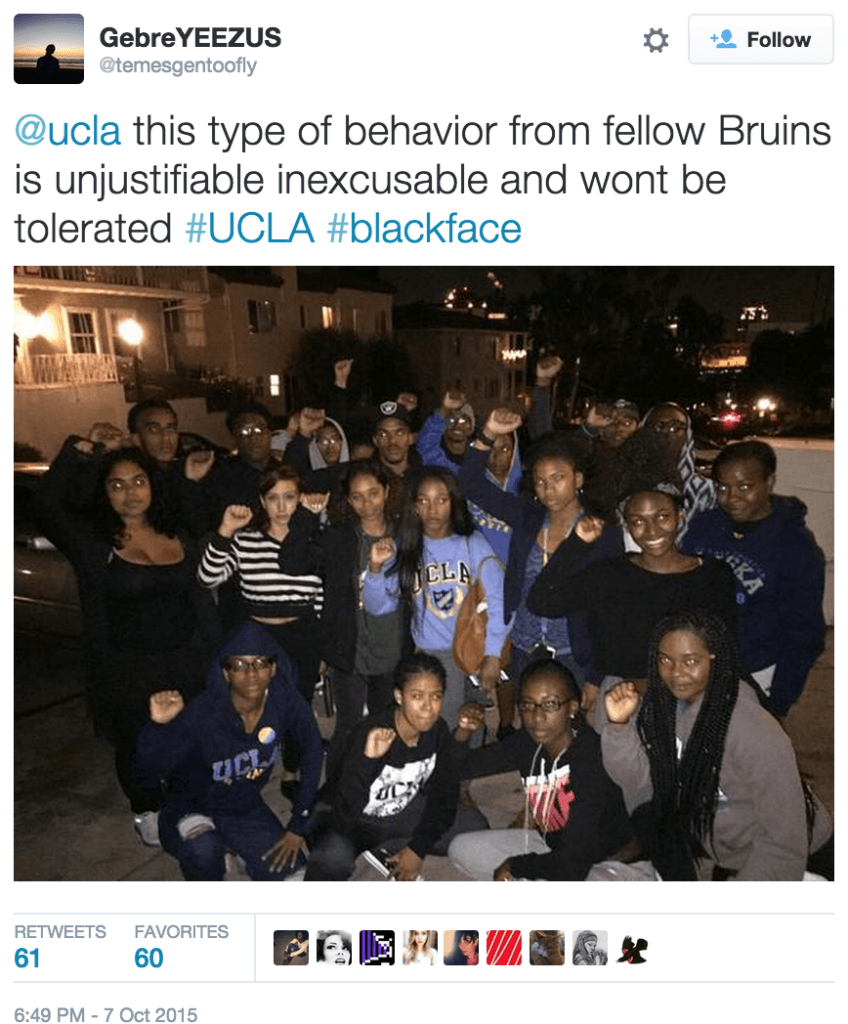 This is not the first time UCLA has dealt with racism, the school actually has a very long history with it. In the late 60s, Bunche Carter and John Huggins who were student organizers from the California chapter of the Black Panthers were shot and killed on campus. Revolution News also reports that, “In 1985, UCLA’s Beta Theta Pi hosted a racist “Tequilla Sunrise” party that drew protests organized by Chicanx students. In 2012, The Black Bruins made a viral video calling out low enrollment of black students at UCLA. Just this spring, racist stickers were found stuck all over UCLA.”

Revolution News reached out to Sigma Phi Epsilon and Alpha Phi who did not return requests for a comment. They contacted the Interfraternity Council at UCLA and were told that the Director would be “out all week” and everyone else in the office was “taking a lot of days off.”

Check out this livestream video from the protest students had yesterday following the party.