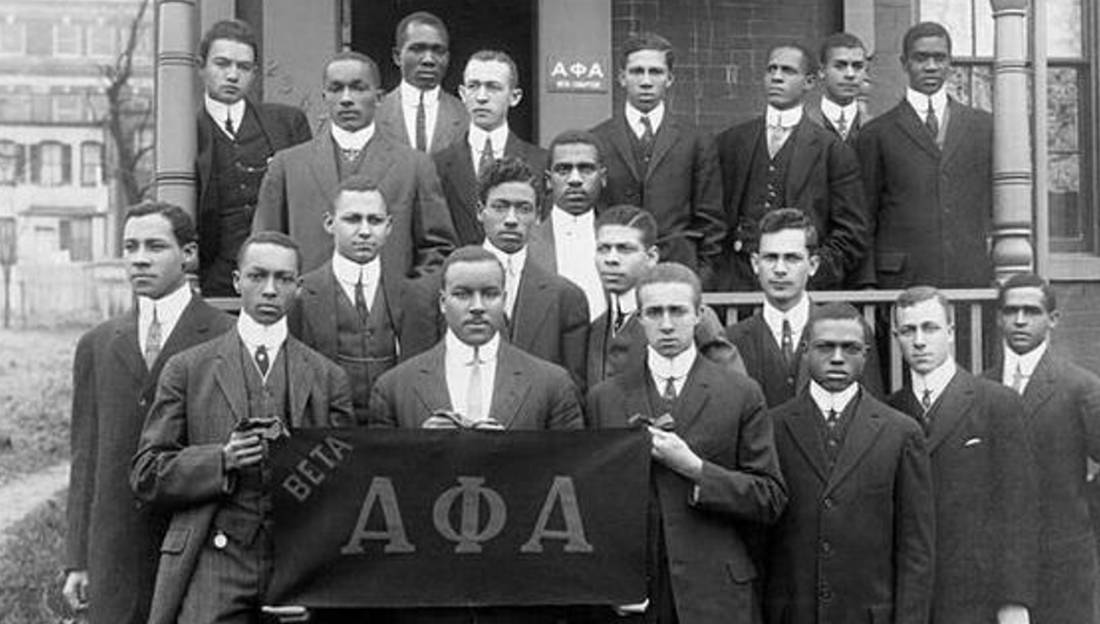 “The chief significance of Alpha Phi Alpha lies in its purpose to stimulate, develop, and cement an intelligent, trained leadership in the unending fight for freedom, equality, and fraternity. Our task is endless.” — Jewel Henry Arthur Callis, May 1946

From its inception, Alpha Phi Alpha — directly and through its membership — has played an instrumental role in the African-American’s struggle towards racial equality and social justice. One could say activism is written into the fraternity’s DNA. Notably, brothers such as Paul Robeson, Joseph Lowery, Andrew Young, Whitney Young, Martin Luther King Jr., and past General President Ozell Sutton were leading Alpha activists, among many others. The fraternity, which has a long history of advocating for civil rights, introduced the “Go-to-High School, Go-to-College” campaign in 1919.

From there, Alpha established The Committee on Public Policy, which addressed issues of race, class, and employment in the black community, and the Alpha Phi Alpha Education Foundation, which sought to tackle the educational, economic, and societal needs of black people at the 24th General Convention in St. Louis, Missouri in 1933. Since the 1960s, there has been a prominent history of Alpha funding Civil Rights activism and litigation. In one particular instance, Frank L. Stanley Jr., Alpha’s 18th general president from 1955 to 1957, general secretary James Huger, and Southern Vice President Lewis O. Swingler traveled to give moral and financial support to Brother Martin Luther King and several members of the fraternity who were indicted for leading the Montgomery Bus Boycott. Brother Stanley presented Brother Martin Luther King Jr. with a check for $1,000. But during the 1960s, a different type of activism was occurring alongside the Civil Rights Movement: campus activism on colleges and universities.

Black activism on college campuses is not a new initiative. When the Jewels decided to move forward with their idea to create the world’s first intercollegiate fraternity for black students in 1906, that was their form of protest, of campus activism. In 1925, W.E.B. Du Bois, who became a member of Alpha Phi Alpha through the Epsilon chapter at the University of Michigan, encouraged students at Fisk University in Nashville, Tennessee to protest against its conservative white president, Fayette McKenzie. McKenzie, who established an oppressive administration at Fisk, was required to suppress the free speech and militancy of any students. “I have never known an institution whose alumni are more bitter and disgusted with the present situation in this university,” Du Bois said in a speech in front of McKenzie, the trustees of the university, students, and alumni. “In Fisk today, discipline is choking freedom, threats are replacing inspiration, iron clad rules, suspicion, tale bearing are almost universal.” Du Bois’s words stuck with the students and encouraged them to wage a 10-week strike, which led to the resignation of the Fisk president.

Alphas have been in the forefront of leading or participating in black student movements on college campuses.

A few decades later, four black North Carolina Agricultural and Technical State University students continued the fight for equality of college campuses. These four students courageously sat down at a whites-only lunch counter to eat at the Woolworth store at 132 South Elm Street in Greensboro, NC, sparking a pivotal moment in the Civil Rights Movement. Known as “The Greensboro Sit-ins,” Brother Ezell Blair (Jibreel Khazan) of Beta Epsilon Chapter helped spearhead the movement. “What these young students did at the time changed the course of the Civil Rights Movement,” Herman “Skip” Mason Jr., past general president of Alpha Phi Alpha Fraternity, Inc, said. “Refusing to leave that Woolworth’s counter and the resulting demonstrations caused thousands in lost revenue and cast an all-important light on the situation blacks in the South faced at that time. Alpha Phi Alpha proudly joins the rest of the country in honoring the work of these American heroes with the opening of a new civil-rights museum in Greensboro.” News of the sit-in spread to other southern cities and re-energized the fight to achieve racial equality.

Inspired by the efforts of Brother Ezell Blair and the Greensboro sit-ins, and another prominent Alpha activist Martin Luther King Jr., Brother Wendell T. Foster Jr. joined 33 other Virginia Union University students in a nonviolent sit-in at the lunch counter of a Thalhimers department store in Richmond, Virginia. These students, known as the Richmond 34, were not only among the first college students in the nation to be arrested over the protests but also played an integral role in the desegregation of the city of Richmond. These were the early signs of a nationwide black student movement, an effort that launched black student unions at universities across the nation and transformed what it meant to be a black student on campus. For decades, Alphas have been in the forefront of leading or participating in black student movements and other activist efforts on college campuses.

In a new age, young brothers have certainly kept that vision by utilizing new tools to carry out Alpha activism in new ways — starting movements via email, Twitter hashtags, or Facebook posts. Younger Alpha brothers on campuses across the nation have inherited a legacy of transforming history, not just simply standing idly by and witnessing it. Whether it is through grassroots organizations like the Dream Defenders, headed by Brother Phillip Agnew, or through the campus protests sparked at the University of Missouri, Alpha Phi Alpha has not lost its flame for activism. Brothers today carry the same spirit, the same passion for activism as the late Past General President Ozell Sutton, who marched with Brother Martin Luther King Jr. at the historic March on Washington D.C. in 1963 and again during the Selma to Montgomery marches in 1965.

“For me, his legacy shows that if he was able to be as successful and overcome as many barriers as he did in his time, then I have no excuse,” Terrell Finner, a Fall 2013 initiate of the Gamma Nu chapter at Pennsylvania State University, said of Brother Ozell Sutton’s legacy. “Seeing other Alpha men who are such successful leaders and activists inspires me to do the same.”

Brother Finner was responsible for organizing the “Die-In” protests at Penn State University.

Die-in protests were being organized on campuses across the nation in the wake of the deaths of Eric Garner and Michael Brown, where students and supporters lay down on the ground and simulated being dead, sometimes holding signs to bring awareness to the situation. Brother William Royster, a Fall 2013 initiate of the Epsilon chapter at the University of Michigan, facilitated two campus-wide protests in response to the non-indictment of the officer who shot Eric Garner. Brother Royster says that Alpha’s legacy in the realm of activism is what encouraged him to join the fraternity, and Brother Sutton’s work still inspires him as a young brother in Alpha. “While it is discouraging that Brother Sutton passed away, his legacy serves as a catalyst for inspiring a generation to continue to work tirelessly to improve our communities,” Brother Royster said. “We can honor his legacy best by following in his footsteps.”

Although Brother Ozell Sutton was the general president of this fraternity from 1981 to 1984, before most undergraduate brothers were even born, his legacy still resonates. “Brother Sutton exists as an example of an Alpha man who reached great heights both fraternally and personally, and that should inspire anyone,” said Brother Desmond Jones, a Spring 2014 initiate of the Rho Beta chapter at Portland State University. “He translated the work of Alpha to his work in the Civil Rights Movement, a skill that many of us are still learning. He is also another reason Alpha has become synonymous with civil rights and making change, something which should not be taken lightly or glanced over. In his 90 years, Ozell Sutton showed exactly what ‘limitlessness’ means. That is something I hope to do as well.”

If you’re not able to vocalize hurt and pain to the people with privilege..then there’s no way to see change.”Payton Head, University of Missouri

Last year, in one of the most notable forms of campus activism in recent memory, student body president and initiate of the Zeta Alpha chapter at the University of Missouri Payton Head, along with other students, organized a series of demonstrations and protests, including a standoff during the homecoming parade in October. These protests, a hunger strike led by one student, and a boycott by Mizzou football players, which included another member of the Zeta Alpha chapter, starting safety Anthony Sherrils, ultimately led to the resignation of former university President Tim Wolfe and Chancellor R. Bowen Loftin. Alpha Phi Alpha brothers and members of Mizzou’s Black Men Initiative camped out in support of the hunger strike. Brother Head was also responsible for drafting and signing the letter that the Missouri Students Association wrote to the University of Missouri System Board of Curators. “Of course there’s a lot of hurt and pain that’s associated with living in a world that’s not created for you,” Brother Head told The Maneater, a campus newspaper at Mizzou. “But at the same time, if you’re not able to vocalize that to the people with privilege, who can help change that world, who have the institutional privilege to create change, then there’s no way to see change.”

The protests at the University of Missouri launched various protests in solidarity at multiple college campuses across the nation, including a walk-out protest at Eastern Michigan University. Students banded together, left their classrooms at the same time, and marched through campus buildings. Brother Demajae Muray, a Fall 2014 initiate of the Epsilon Eta chapter at Eastern Michigan University, said that the march was about “taking a stand for what you believe in.” 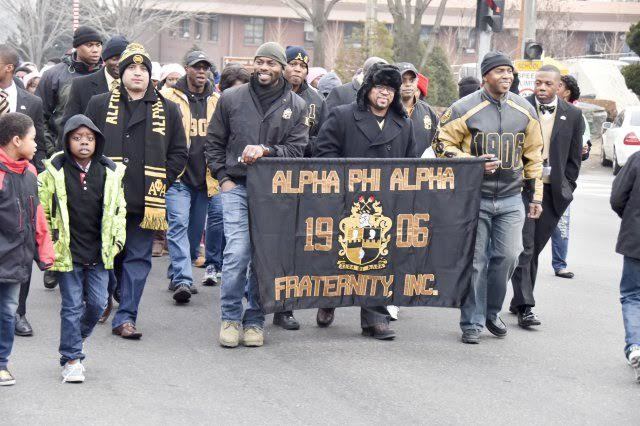 “College chapters have always played an important role in civil rights advocacy,” said Brother Rafael Ramirez, a 2014 initiate of the Eta chapter at Columbia University. “Chapters of Alpha represent a collection of talented, driven young men of color whom are passionate about serving and advocating for their communities. The work that I have been privileged to be able to do through my chapter, and the work that brothers around the country have been able to do through their respective chapters, is a direct continuation of the legacy set by all the brothers that have come before us.”

Brother Ramirez was responsible for organizing the #BoycottBlackFriday March and rally in New York City that began at Herald Square and ended in Times Square. Brother Ramirez helped create and manage the corresponding Facebook event page that engaged over 200,000 people across North America. College days swiftly pass, but Alpha’s undergraduate brothers are using their time in college to continue the legacy of activism that is ingrained in our fraternity’s — and its members’ — DNA.

But the years in between, Sutton said, “belong to him and he has everything to say about what happens in that space.” It is up to us to what we decide to do within that space.

This article was written by Philip Lewis and originally appeared on mystudentvoices.com.